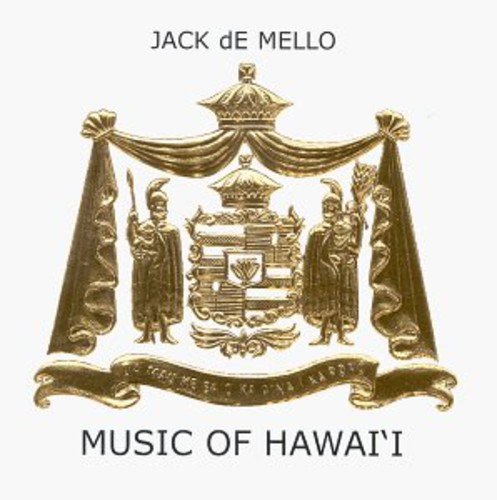 Music of Hawai'i, when first released, achieved a new standard of success by which all other albums would be measured in the future. Music of Jack de Mello's contributions to Hawaiian music set new standards for others to follow. Jack continues writing music and creating new techniques with the technology of today, but his history must be preserved and with digital mediums commonplace and the purest of recording techniques of past eras, Jack's son, Jon, now presents this first in a series of collectors' editions that have withstood, the test of time.

Jack de Mello and his lush orchestrations would change the history of Hawaiian music forever. Jack recorded close to 160 albums of all types of music, including almost 500 Hawaiian songs. These songs recorded in the biggest and best studios around the world gave Hawaiian music a new identity.

Jack's talents went beyond his love for Hawaiian music. Hanna Barbera contracted Jack to compose and orchestrate music for the Flinstones, the Jetsons, Magilla Gorilla, Top Kat and Ricochet Rabbit.

Jack was recording all of this while developing the talents of Emma Veary, Nina Keali'iwahamana, Marlene Sai---most of Hawai'i recognized talents in the 50's and 60's. As the Hawaiian cultural renaissance was born in the late 60's, early 70's, Jack was discovering a new generation of musical talents; The Beamers, The Brothers Cazimero, Jon amp; Randy, Booga Booga. Every one of Jack's discoveries was to shape Hawaiian music in their own way. Jack demanded that his proteges be musically educated and that included his son, Jon, and he always demanded that they be passionate about what they were doing, whether it was composing, arranging, playing or singing. A great tribute to Jack is that all of his artists continue to work in the field of music and credit Jack and the habits he instilled in them with their decades-long success story.

Campaigners make the case for leisure travel by rail

The Campaign for Better Transport is calling on the Government to promote leisure travel through cost-effective ticketing,

Specialist divers are pouring underwater concrete to protect a pair of railway viaducts on the West Coast Main Line in Carlisle.

​Launched in 2003, the RAIL100 Breakfast Club is a business networking  club for the industry’s senior managers. It helps members keep abreast of current topics within the industry and gives them the ability to discuss these with their peers.

Membership includes 4 breakfast meetings and a dinner in November.

See the RAIL 100 Breakfast Club video and what our members and sponsors say about us.