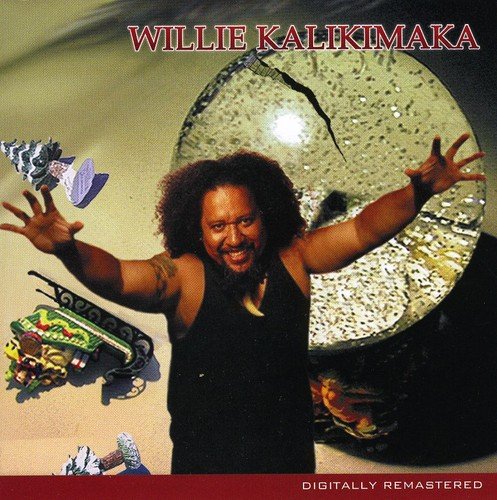 "Willie Kalikimaka" features 13 of the holiday's best tunes and showcases the incredible musical versatility of Willie K. His haunting depth of traditional melodies "Silent Night" and "Unto Us Is Born a King" is countered with the sassy, local-style, up-beat renditions of "I Saw Mommy Kissing Santa Claus", "Mele Kalikimaka" and "Christmas Bells." Willie K's versatility is highlighted in the skanking sounds of "A Reggae Christmas," the soothing lullaby sounds of "Song of Christmas," and the foot-stomping "Little Drummer Boy / Ring Your Christmas Bells."

Appearing with Willie K as a very special guest is country legend Willie Nelson, performing both vocals and guitar accompaniment in a soulful duet of "Away in A Manger".

And back by popular demand, Willie K's powerful signature piece, the heart-warming "O Holy Night," performed as it has never been done before!

One of the most asked questions in the last few years at The Mountain Apple Company is "what is Willie K really like---who is he, really?" Years ago, when he charged on the Hawaiian music scene, everyone was talking about this overnight success story. In the entertainment business an overnight success sometimes takes decades of hard work and sacrifice. That more accurately reflects Willie K's story.

Raised on Maui, Willie experienced the music business first hand. His father, one of the most respected Hawaiian musicians, recruited Willie by the age of 11 to play in his band. It was at the age of ten that the family moved from Oahu to Maui, and to make new friends fast, Willie picked up the ukulele and began to play. His father taught him vibes and bass. He continues to master instruments in the same manner. Jon de Mello quips, "If Willie doesn't know how to play an instrument you'd like to have on the recording, hand him the instrument, go to lunch, and when you return from your meal, Willie will have mastered the instrument and is ready to record".

By his high school graduation, Willie was playing in as many as 8 bands--country and western, salsa, rhythm and blues and he had discovered Santana and Jimi Hendrix. A few years later he moved to San Francisco determined to make it in the music scene.

The Hawaiian community in California discovered Willie when he opened for groups such as Camp;K. Frustrated by the scene in San Francisco, Willie moved back to Maui where he performed solo for the next few years. He pondered his options and again with renewed determination, focused on recording an album of his own. His first three albums changed the direction of contemporary Hawaiian music. He swept up Hoku Awards from the Hawaii Academy of Recording Arts and continued to record for a new company, Round Island Records. After two more recording efforts and once again discouraged by the business, he took a break from recording his own music and hooked up with a new talent, Amy Hanaiali'i. He has produced three albums with Amy for The Mountain Apple Company. He earned more Hk Awards for his efforts when Amy's albums won Album of the Year, Female Vocalist, Song of the Year and Hawaiian Album of the Year awards.

Over the years, Willie K has also been a prolific composer. His collaborations with Amy Hnaiali'i over the past few years have been received by his public with open arms, and an entire new world of fans opened up because of Amy and Willie's magic. The fans love the electricity of these two performers on both compact disc and stage.

This year while working on Amy's new album, Willie filled the studio with his own music. Between takes and when Amy had other business to take care of, Willie kept the recorder going and finished a Christmas album, Willie Kalikimaka.

Willie Kalikimaka reflects Willie's favorite songs for the season and fulfills the public's demand for his version of O Holy Night recorded some years back as a single. O Holy Night is the most requested Christmas song according to local disc jockeys throughout the State and is finally available on CD again.

Away in a Manger was almost completely recorded when Willie K ran into Willie Nelson on Maui. The conversation resulted a duet on this incredible rendition of this Christmas classic and an experience that will be etched in to Willie K's musical career. The song was complete within 72 hours of their meeting. The common language of music created an instant friendship.

Nothing in this world makes Willie K happier than creating music. At the end of a full summer of recording, Willie claimed to have had the best summer of his life. It is now as we approach the last Christmas celebration of the millennium that we aim to make your Christmas the best season of your year. BAND_MEMBERS: Willie K (vocals, guitars, 'ukulele, bass, 8-string bass, percussion, sake bottle, shotglass); Willie Nelson (guitar); Amy Hanaiali'i (background vocals); Bobby Ingano (steel guitar); James Ganeko (drums); Michelle Romero (cello); Kim Mackenzie (violin)